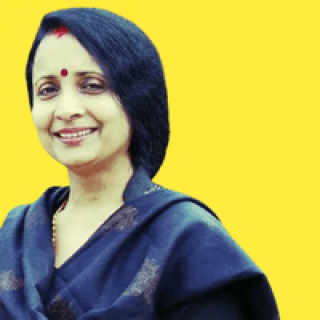 O Devi Saraswati, the most Auspicious Goddess of Knowledge with Lotus like Eyes,

An Embodiment of Knowledge with Large Eyes, Kindly Bless me with Knowledge. I Salute you.

Vasant Panchami is an important Indian festival celebrated every year in the month of Magh according to the Hindu calendar. Celebrated on the fifth day of Magh, the day falls somewhere in the months of February or March according to the Gregorian calendar. The significance of the day lies in the worship of Goddess Saraswati, symbol of wisdom and also the onset of spring season.

According to the popular belief, the origins of this festival lie in Aryan period. Aryans came and settled in India through Khyber Pass, crossing the Saraswati River among many others. Being a primitive civilization, most of their development took place along the banks of the River Saraswati. Thus, River Saraswati began to be associated with fertility and knowledge. It is then that the day began to be celebrated.

According to mythology, a popular associated with this day is connected with poet Kalidasa. After he was married off to a beautiful princess through trickery, the princess kicked him out of her bed as she learned that he was foolish. Following this, Kalidasa went to commit suicide, upon which Saraswati emerged from the waters and asked him to take a dip there. After taking a dip in the holy waters, Kalidasa became knowledgeable and began writing poetry. Thus, Vasant Panchami is celebrated to venerate Goddess Saraswati, the goddess of education and learning.

The color yellow is the predominant color associated with the festival, the origins of which are supposed to be the fields of mustard which can be seen in Punjab and Haryana during this period. Kite flying is also commonly associated with this festival. Children as well as adults fly kites on this day to celebrate freedom and enjoyment.

Another tradition associated with this day is that of initiating studies in the young. Young children often begin learning on this day, which is believed to be the reason why the school sessions start in the month of March. Sweets with a yellow hue are also distributed on this day and people can also be seen donating books and other literary material to the poor.

And the day after Saraswati Puja or Basant Panchami in west Bengal Sheetal Shashti is observed. Sheetal means cool and shashti means sixth day. It is customary for west Bengal people to eat a special dish called gota seddho. It literally means whole boiled. Because its made of whole lentils with 5 type of whole vegetables. None of the vegetables are cut. And its cooked on the day of Saraswati Puja or basant panchami but served on the next day.

This sheetal shashti is mainly observed by the Bengali mothers praying long healthy life of their children.

Raw mustard oil is drizzled over this gota seddho with salt. Each family has their own version to make it. With this dish six type of fried veggies, some no onion garlic vegetables, kheer or pudding with date palm jaggery or khajur/nolen gur, steamed rice, ber or Indian plum chutney and puri/luchi or kachauri are cooked on this day to be eaten next day.

In fact sheetal shashti is generally marked as a no cooking day. This observed by mothers but everyone in the family enjoy this special food.
Now coming to the today’s Basant Panchami special recipe.

A very delicious and easy to make sweet for this special accession.

You can make these with very simple and easily available ingredients. Need only moong dal or split green gram or yellow lentils, sugar, water, khoya/mawa or dried milk with ghee or clarified butter, little cardamom powder and saffron. A delicious burfi or fudge for this special accession.

Wash and soak the lentils in enough water for 2 – 3 hours.

Wash again and drain the lentils.

Grind into a smooth paste.

Heat water and sugar in a pan. When it starts to boil reduce the flame and add cardamom powder and saffron. Stir well and let it boil for 6 – 7 minutes on low flame. Or until the syrup becomes one thread consistency.

Remove from heat and let it cool down.

Heat ghee or clarified butter in a heavy bottom pan or nonstick pan. Add ground lentils and stir continuously. Cook on low flame until it changes it’s colour into golden brown and becomes like a dough.
This step need patience. You can feel the aroma of fried lentils. Don’t make it in a hurry. Raw smell should goes out.

After frying take out the lentils in a bowl.

In the same pan cook the khoya/mawa or dried milk stirring constantly on low flame. Cook till it slightly change colour and becomes dough like consistency.

Cook till the mixture dried up completely and leaves the sides.

Grease a plate with little ghee or clarified butter.

Spread the mixture over it. Flatten the top with a spoon or your palm. Sprinkle chopped pistachios over it.

Keep in refrigerator for 1/2 an hour to set it.
Cut in your desired shape and size.

Serve and enjoy the heavenly taste of these fudge or burfi.

I am Sujata Roy. A homemaker, a doting mother to two beautiful grown up children, a blogger, a passionate cook and lastly a foodie. Experimenting in the kitchen is what I love and enjoy doing the most. Specially experimenting with vegetarian dishes and egg-less cakes and cookies is what interests me more. My loved ones are fond of vegetarian cuisines, so I have them in my mind whenever I dish out a new recipe. However, I do not limit my experimental cooking to vegetarian recipes only, non-vegetarian recipe ideas are also dished out. Thank you for visiting my blog. Happy Cooking! View all posts by Batter Up With Sujata

This site uses Akismet to reduce spam. Learn how your comment data is processed.